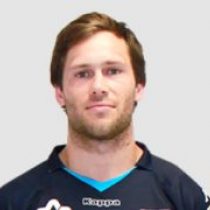 Nicknamed 'Rocky' by his teammates throughout his rugby career, Jan Serfontein has had a quiet determination about him since graduating from the illustrious Grey College in Bloemfontein.

An outside centre by trade, inside centre by skill, Serfontein is electric in attack and more than capable with regards to his defensive efforts.

Having been earmarked by the Blue Bulls as one for the future aged just 14, Serfontein began repaying the faith in 2013 when he made his bow on the Super Rugby stage.

Serfontein was a member of the successful South Africa under 20 team that won the 2012 Junior World Championship with his performances in the tournament leading to him being named 2012 World Junior Player of the Year.

He was also included in the squad for the 2013 IRB Junior World Championship but was later withdrawn to make him available for the senior national team.

Serfontein made his test debut for the Springboks off the bench against Italy in Durban 2013. Serfontein made 60 appearances for the Bulls during his time at the union scoring 17 tries in Super Rugby before signing with TOP14 outfit Montpellier.

Serfontein played 35 Tests for the Springboks between 2013 and 2017 and ended on the winning side in 24 of those Tests for an impressive 71% win-ratio.

He quickly became a key figure in the Montpellier line up in his first two seasons with the club and featured 29 times (25 in the starting line up) for the club during the 2018/19 season scoring six tries scored.

In June 2019, the Springbok centre extended his contract for three additional seasons, until 2023.