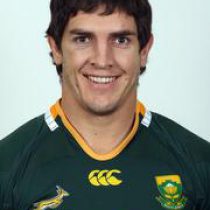 Fourie is a South African rugby union rugby player. He is a versatile backline player whose usual position is in the centres. He was a member of the 2007 Rugby World Cup winning team, playing at outside centre for 6 out of 7 matches, including all 80 minutes of the World Cup Final, which South Africa won 15-6. He currently plays for Kobe Steel Kobelco Steelers in the Japanese Top League competition.