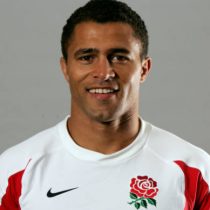 A legend of two codes, Jason Robinson enjoyed an incredible career in both rugby league and rugby union. Of Scottish and Jamaican descent, Robinson was raised by his mother in Leeds after his father left before Jason's birth.

Robinson rose above the hardships of his youth to become a superstar on the rugby pitch. His Rugby League career started at Wigan in 1992 after been talent spotted whilst playing for Hunslett Boys Club.

During his Rugby League career he played 281 games, scoring an incredible 171 tries and during his time with Wigan, his wins included a Super League title, four Championships, three Challenge Cups, three Regal Trophy wins, 4 premiership titles and an away win against Brisbane Broncos to win the World Club Championship in 1994.

He also represented England, Great Britain and the British Lions, finishing as runner up in the England versus Australia Rugby League World Cup Final in 1995. After a call with then England coach Clive Woodward, Jason Robinson switched codes and joined Premiership club Sale Sharks where he had an immediate impact on Rugby Union, going on to play 159 games for Sale Sharks, scoring 248 points.

He made his début for Sale Sharks against Coventry in November 2000 and in the 2005/6 season he became the first person to have won both the Premiership and the Super League trophies. It did not take long for Robinson to make a mark on the test arena in rugby union when he made his England test debut as a substitute against Italy in February 2001, having played in the A match against Wales at Wrexham a fortnight earlier.

In doing so he was only the second man ever to play rugby union for England after having first played Rugby League for Great Britain (the first having been Barrie-Jon Mather in 1999).

His incredible impact early on in his union career saw him being called into the 2001 British and Irish Lions tour to Australia and was one of the outstanding players in the side that won the first Test in Brisbane 29–13. In that game he sidestepped past Australian fullback Chris Latham. He went on to score another try in the last Test.

He went on to play all seven of England's World Cup games in 2003 scoring England's only try in the final as they beat Australia 17–20 to win the title for the first time.

In 2004, he was appointed as captain of the Sale Sharks and led the side to finis third in the table and won the European Challenge Cup.

After Lawrence Dallaglio's international retirement in 2005, Jonny Wilkinson was initially appointed captain. However, Wilkinson was injured for the 2005 autumn internationals and Robinson was appointed captain. He was the 118th captain of England, the first mixed-race player and the first former professional rugby league footballer to captain England. In his first appearance as captain, he scored a hat-trick of tries in a 70–0 rout of Canada


Jason’s trademark side step, devastating acceleration and ability to beat defenders, mades him one of the true greats of both codes. He was awarded the MBE for his role in the 2003 World Cup and the OBE for services to Rugby in 2008.

In 2005, he was again called up to the Lions' 2005 tour of New Zealand and took his appearance tally to 10 for the side including four tests. On 24 September 2005, Robinson announced his retirement from international rugby union, stating that he wished to spend more time with his family. Sale Sharks' most successful period in the club’s history culminated with a table-topping performance backed up by winning the 2005/6 Guinness Premiership final and reaching the quarter-finals of the Heineken Cup.

Nicknamed 'Billy Whizz' after a character in the British comic The Beano, Robinson came out of test retirement ahead of the 2007 Six Nations tournament and scored twice on his return in England's opening victory over Scotland. He also scored another try against the Italians the following week.

After the Six Nations, Robinson announced he would retire from playing club rugby at the end of the 2006/07 season. Robinson ended his club career with a match-winning try 6 seconds from time as Sale edged past Bath in the Premiership. In the last play of the game, he received the ball 30 metres out and could not be stopped.

Robinson sustained an injury against South Africa in the 2007 Rugby World Cup which ruled him out of the remainder of the pool stages but returned in time for the knockout stages. He earned his 50th test cap against France in the semi finals before playing his final tests against South Africa in the Final where he was forced off the pitch with an injury in the second half.

The incredibly talented outside back played 56 test matches and scored 30 tries, two of which for the British and Irish Lions.

In February 2009, Robinson accepted an invitation from Sale Sharks director of rugby Kingsley Jones to join his new-look backroom team as Head Coach but he would part company with the club after just one season.

In July 2010, he announced a shock return to playing with English National League Two North side Fylde where he once again linked up with Ashton who had been appointed the club's coaching consultant earlier the same year. Robinson was instrumental in Fylde's promotion to National One scoring four tries in 13 appearances. In July 2011 Robinson announced his retirement from rugby. Robinson also stepped down from his coaching and club ambassador roles at the club.