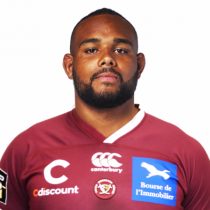 Poirot, a native of L'Isle-Adam in the Val-d'Oise, grew up in Lalinde, near Bergerac in the Dordogne, he is of French-Nigerian origin.

Having joined Brive at the age of 15 he went through the age groups and made 10 appearances for the first team before moving to Bordeaux in 2012.

He was a member of the French U20 squad that participated in the U20 World Championship in South Africa, 2012 and from there he went from strength to strength under the guidance of Raphael Ibanez & earned selection for the French squad ahead of the 2016 Six Nations.

Poirot has earned a reputation of being a world-class scrummager and like most modern props, he has an outstanding work rate around the park having made his test debut against Italy coming off the bench.

Having firmly cemented his place in the France squad, Poirot has gone on to lead his club side, Bordeaux, before earning the honour of captaining his country in 2019 against Scotland.

Poirot was named in France's 2019 Rugby World Cup and went on to feature in all of the side's matches at the tournament in Japan and captained the side against Tonga.

In June 2020, Poirot announced his shock retirement from test rugby at the age of 27 and with 36 test caps to his name, 3 as captain.

The powerful loosehead said that he made the decision to retire in order to dedicate himself to winning club rugby honours and fatherhood.