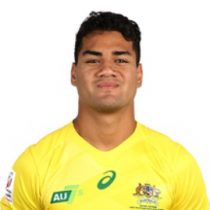 Cousin of Wallabies Will Skelton and Peter Betham, Jeral Skelton started off in Rugby League before making his way into Union and ultimately 7s where he went on to represent the Australian 7s side.

The Brisbane-raised Skelton debuted for Australia 7s under Andy Friend in Cape Town as an 18-year-old in 2017.

He had his Olympic dreams derailed due to the 2020 games being postponed which allowed him to make his way into 15s even after a number of offers from the NRL.

Ahead of the Australian 2020 Super Rugby tournament the loose forward signed with the Melbourne Rebels.

Tim Walsh, Australian 7s coach at the time, described Skelton as being like an NBA player with his array of skills and had this to say “He is a jack of all trades and becoming a master of a few of them, too. He is learning the game and really starting to produce some world-class performances.”