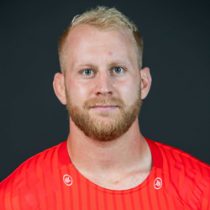 Loughman first played rugby for Athy RFC and was capped at Leinster Under-18 Youths level.

He then moved to Blackrock College and won the Leinster Schools Rugby Senior Cup in 2013 and 2014.

Jeremy joined Munster on a three-month development contract in 2017, and made his first appearance for Munster A on 8 December 2017, featuring off the bench.

Jeremy signed a two-year contract with Munster in February 2020, a deal that will see him remain with the province until at least June 2022.