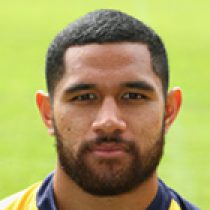 Su’a was one of the Crusaders’ new recruits in 2013. He is a former Australian age-group representative player, has previously been contracted to the Waratahs, was in the Melbourne Rebels wider training squad, and represented Samoa at the 2011 Rugby World Cup. But it was his 2012 season with the Tasman Makos in the ITM Cup where he really shone. With his impressive speed, strength and strong pass he is a dominant player on the field and his presence does not go unknown with his quick way of play.