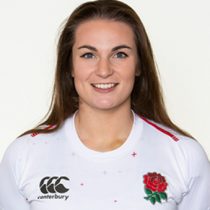 Netherlands-born Jo was brought into rugby by her father David who was a coach at Glossop RUFC and she took up the game at 13. She also spent time at Firwood Waterloo but combined playing at Darlington Mowden Park Sharks along with studying, and playing, at Teeside University where she was named the University’s sports woman of the year in 2015.


Jo has remained with the Sharks from her debut in 2012 to the end of the 2017-18 season, while completing her studies for a Masters in Physiotherapy at Northumbria University. She then moved to Loughborough Lightning for the start of the 2018-19 season where she helped the club finish third.


The back row forward’s leadership skills have been recognised as she has captained a number of sides during her career including Northumbria Women, Teeside Women and Glossop U18.

Jo was awarded a full-time England contract in January 2019 and featured twice as a replacement during the 2019 Women’s Six Nations.