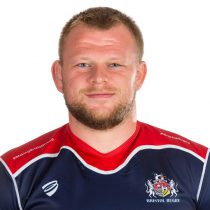 A proud Bristolian, Joyce represented Clifton RFC, St Mary’s, Southmead RFC and Dings Crusaders in the Bristol Combination, before joining the Bristol Rugby Academy from Filton College ahead of the 2012/13 season.

A powerful ball carrier, the physical lock has featured for England Schools & Club’s U18s and U19, and Ireland U20s.

Joyce made his League debut for Bristol in the 2014/15 season, as well as representing the club in the B&I Cup.

In November 2017 he committed his future to Bristol Rugby until 2020.

In 2018, Joyce won the Players' player of the year award at the end of the season club dinner.

He heads into the new Premiership season having represented Bristol on 86 occasions, scoring 40 points.