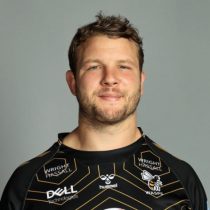 A powerful close-range operator, Launchbury is renowned for getting through huge amounts of work in both attack and defence in addition to his set-piece duties. The Devon-born lock, who played his early rugby at Exmouth RFC, joined Wasps’ Senior Academy in 2009.

The second row joined Wasps Academy in the 2009 season, made his Premiership debut against Leicester Tigers two years later. His performances for Worthing prompted Wasps to seal his signature. Alongside the likes of Sam Jones, Elliot Daly and Christian Wade, Launchbury was thrown into Premiership Rugby as a teenager and quickly became recognised as one of his country’s leading performers.

This led to England Under 20 honours in 2011, rapidly followed by a senior call-up in 2012/13 and the reward of the Aviva Premiership’s Young Player Award. Joe had previously represented England at U18 and U20 level. Indeed, Joe was named, by his peers, England player of the tournament in the IRB Junior World Championships of 2011 and man of the match as England’s U20 Six Nations clinching victory over Ireland in 2011. Launchbury made his England debut in a November 2012 test against Fiji.

Launchbury has been a vital member of the England squad since that point, appearing in the 2015 World Cup plus summer tours to New Zealand, Argentina and Australia and being part of a Grand Slam win.

After impressive performances and visible leadership skills at Wasps, he was named their captain for 2016/17 season. Due to the injured of Maro Itoje and George Kruis, Launchbury, the Wasps captain, who was as highly regarded as Itoje when he first came on the scene in 2012, was a ready-made fit in the second row against South Africa at Twickenham.

He passed the 100-appearance mark for Wasps during the 2016/17 season and was named alongside three teammates in the Dream Team at the end of the campaign He was rather controversially left out of the 2017 Lions squad to tour New Zealand. Launchbury's form continued through the subsequent seasons as he represented England at the Six Nations and 2019 Rugby World Cup - the latter where England reached the final in Japan.