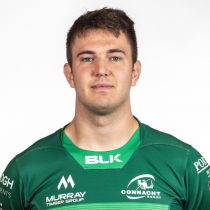 A second-rower who played his early rugby at Loughborough RFC, Joe made his Tigers debut against the Barbarians at Welford Road in November 2014.

An unused replacement in the Anglo-Welsh Cup game away to London Irish in November 2014, he made his club debut three days later as a replacement in the Barbarians fixture at Welford Road and then started the Cup win over Sale Sharks.

A former student at De Lisle College and Wyggeston Queen Elizabeth I College, Joe gained senior rugby experience with Leicester Lions at National League level and at Championship side Doncaster in 2015/16 as well as playing in the Premiership ‘A’ League with Tigers.

In May 2018, Connacht Rugby announced the signing of the Irish qualified lock from Leicester Tigers ahead of the 2018/19 season.

As of April 2020, he has made 25 appearances for the Irish Province.