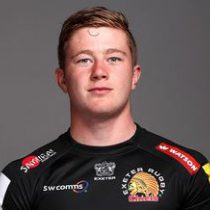 Joe Snow was a promising footballer on the books of Yeovil Town who did not pick up a rugby ball until the age of 12.

Since then, the Exeter Chiefs scrum-half has been making up for lost time and in the 2017/18 season was handed his first call-up to the England U20s.

Born in Taunton, Joe moved from the round to the oval ball while at Heathfield Community School and then joined his local club, Taunton RFC, at the age of 13.

Three years later he joined the Chiefs academy as part of their link-up with Bicton College.

The youngster has always shown leadership potential, captaining his school, his county and the Chiefs U18s side – and won the AASE League final with Exeter College in the 2016/17 campaign.