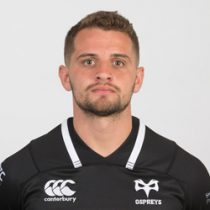 Thomas represented the Ospreys and Wales at age-grade level, going to two U20 World Championships as well as playing in all five games during their Grand Slam success in 2016.

His senior Ospreys debut was in 2015, coming off the bench in a January defeat to Gloucester at Kingsholm in the LV= Cup.

He’s featured in all 12 British & Irish Cup games over the last two seasons, scoring four tries, while he also caught the eye running in a hat-trick against the Belgian national side in pre-season action for the Ospreys last summer.

The 2017 season saw him start in all four Anglo-Welsh Cup matches before signing his first professional contract with his home region in March 2017.

Thomas signed a short-term deal with Dragons Rugby in November 2017.

In June 2019, he signed a deal with Leicester Tigers.