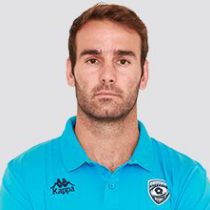 Born in Aries France on 4 March 1987, Joffrey Michel, started his professional career with USA Perpignan in 2008.

Michel's versatility across the back three was a real asset for Perpignan, as he made over 100 appearances for the club.

In 2016, Michel signed for Montpellier having spent 9 years at Perpignan. Since arriving at Montpellier he has helped his side finish in the top 3 on two occasions (2015/16 and 2016/17 seasons)

In May 2017, Michel was released from Montpellier following the conclusion of the 2016/17 season.

In July 2017, Michel returned to Montpellier as a medical joker for Vincent Martin at the start of the 2017/18 season.