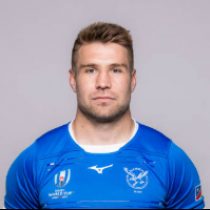 At high school level, Deysel represented Namibia at South African youth weeks, playing at the 2008 Under-18 Academy Week held in George and at the 2009 Under-18 Craven Week held in East London.

After high school, he moved to South Africa to enroll at the Potchefstroom Campus of the North-West University. He joined the Potchefstroom-based Leopards rugby union and represented them in the Under-21 Provincial Championship in 2011 and 2012, as well as playing for university side NWU Pukke in the Varsity Cup competition.

He made his first class debut during the 2014 Vodacom Cup competition, playing off the bench in their 16–18 defeat to the Golden Lions.[2] He again came on as a replacement in their match against the Limpopo Blue Bulls a week later and scored his first senior try in that match, scoring in the 48th minute of a 71–10 victory.

Making his debut for Namibia at 21, Deysel is a shining star for the side in the midfield. Having a stellar season for North West University (Pukke) in the 2015 Varsity Cup he made the VC Dream Team. He will showcase his talents on the international stage for Namibia at the 2015 World Cup. He made a further eight appearances before being named in Namibia's squad for the 2015 Rugby World Cup.

Deysel made 4 appearances for the Sharks and signed a new two-year deal with the Durban-based side before leaving at the end of the 2018 season.