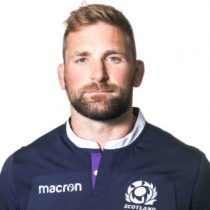 His performances for the now Scotstoun-based side were soon rewarded with selection in Scotland’s squad for the 2007 World Cup in France where he made his international debut against New Zealand aged 20.

Barclay was selected in Scotland before he made his Glasgow debut, the club for whom he signed as an apprentice for in 2004.

His Warrior debut came in November 2004, missing out on becoming the league’s youngest-ever player by only two days. The Hong Kong-born flanker represented Scotland at U-18 U-20, 7’s, and A level before his Senior debut.

After the 2007 World Cup Barclay started to become involved with the Scotland Squad more and became a permanent starter until the end of the 2011 World Cup.

During this time he gained wide recognition from many pundits as one of the top openside "fetchers" in the game due to his dominance of the breakdown.

In April 2013, Barclay signed for Scarlets on a three-year contract after Glasgow reneged on an initial contract extension.

He started the first four games for Scotland in the 2016 RBS 6 Nations, scoring one try. The Llanelli based flanker started in the 19-16 win over Argentina in Murrayfield in the Autumn International.

In January 2017, he was included in Scotland's squad to compete in the 2017 Six Nations tournament, having previously played 26 Six Nations matches scoring 2 tries.

In May 2017, Barclay was named as the Scotland captain for the three-Test summer tour.

Six months later, he agreed to join Edinburgh from Scarlets for the 2018-19 season. He was with the Welsh region since leaving Glasgow Warriors in 2013 and captained them to the Pro12 title in 2016.

Barclay brought a wealth of experience to the Scottish squad as they went into the 2018 Six Nations.

He captained the side in his final appearance against Russia at the Japan showpiece in October 2019 before announcing his international retirement in December 2019.

He has earned 76 caps for his country during a 12-year Test career that saw him play in 3 World Cups.

In April 2020, it was announced that Barclay was one of 9 players to leave Edinburgh at the end of the season.