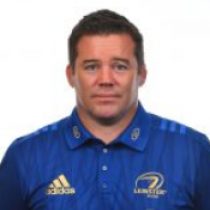 Former Ireland ‘A’ captain John Fogarty was born in Cork, raised in Tipperary and was educated in Rockwell College. John enjoyed a three-year spell with Munster (2000-03) and made 110 appearances for Connacht (83 in the Celtic League and 27 in the European Challenge Cup).

From 2008-2011, Forgarty made 44 appearances for Leinster and was a part of the squad that defeated Leicester Tigers in the 2009 Heineken Cup Final. He was called up to the Ireland squad for the 2010 tour of New Zealand and Australia and earned his first test cap as a replacement in the 75th minute against the All Blacks on 12 June 2010.

He was also part of an Ireland XV to play the New Zealand Māori team. Fogarty announced his retirement in November 2010. He had been advised by doctors to do so, due to having suffered repeated concussions

After retirement Fogarty became an Elite Player Development Officer with the province, working with the Leinster ‘A’ and also fulfilling the role of scrum coach with the Ireland Under-20s.

He was appointed as Leinster scrum coach in June 2015. April 2019 saw him take up a role of IRFU National Academy Forwards Coach, replacing Greg Feek, who would step down after the 2019 World Cup in Japan.