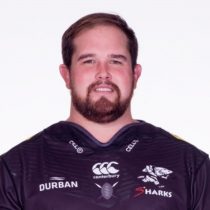 Born and raised in the Western Cape John-Hubert Meyer did not make his mark on provincial rugby until he left school and joined the Sharks Academy.

He returned to the Cape in 2014 and represented the Western Province under 21s and the Maties in the Varsity Cup.

In 2016 he returned to Durban and attended UKZN where he played for the UKZN Impi side in the Varsity Shield.

Meyer was included in the Sharks XV squad for the 2016 Currie Cup qualification series and he made his first-class debut against the Welwitschias.

He was also included in the Sharks squad for the Currie Cup Premier Division, and he made his debut at that level in against the Griquas.

He was named in the Sharks 2017 Super Rugby squad and made his debut against the Southern Kings.

Meyer made one other appearance for the Sharks during the Super Rugby season but featured more regularly during the Currie Cup season and in December the young front rower signed a contract extension until the end of the 2020 season.