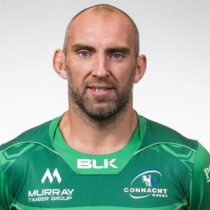 Portumna born Muldoon and Connacht are a match made in heaven and his impressive performances in the green of Connacht saw him selected for the green of Ireland, where he made his debut against Canada on the 23rd of May 2009 on Ireland’s summer tour of North America.

Muldoon captained Connacht for three seasons, until 2011. Muldoon was stripped of the captaincy along with Gavin Duffy and Michael Swift, as they became 'leaders off the field' after a poor run of form in the 2013/14 season. Quite like former team mate Gavin Duffy, Muldoon represented his county at minor G.A.A level, where he won an All Ireland Minor hurling medal in 2000.

Muldoon made his 300th appearance for Connacht on the 15th April 2017, when he captained the side against Leinster.

In January 2018, Muldoon announced that he would retire at the end of the 2017/18 season following 17 years with the province represented the side over 300 times and captaining Connacht to success in the PRO12 Championship in 2016.

In April 2018, Bristol Rugby announced that Muldoon will link up with former Connacht coach Pat Lam at Bristol as defence coach for the 2018-19 season.

In November 2019 he was appointed as Bristol Bears forwards coach ahead of the 2020/21 campaign.