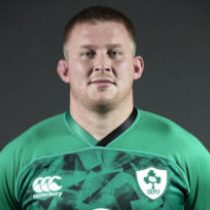 From Berrings, Co. Cork the CBC educated prop can play tight or loose-head. He represented Munster at Schools & U19/20 level, and played with the International Club XV side in 2010 and 2011. Ryan played schools rugby for Christian Brothers and represented Munster at Schools, U19, U20 and Academy level. In 2010 and 2011, and also played for the International Club XV.

Was on the bench for the November '11 Heineken Cup game v Northampton Saints and made his European debut against Racing Metro in January '13 in Thomond Park.

He went on loan to London Irish for the opening games of the 2012/13 season. Developed ulcerative colitis and battles with the condition in maintaining his weight.

Ryan went on loan to London Irish for the opening games of the 2012/13 season. He played in Emerging Ireland’s Nations Cup-winning campaign in Romania in 2014. Ryan then made his first European start when lining out against Clermont at Stade Marcel Michelin in 2014.

He scored his first try for the province against Ospreys in March and finished out the 2014/15 season with 20 appearances. Ryan made his Ireland debut in the November International against Canada at the Aviva Stadium & his RBS 6 Nations debut was off the bench in Edinburgh in November. He penned a three-year deal in January that will see him remain at Munster until at least June 2019.

A tremendous 2016/17 in both the red of Munster and green of Ireland saw him nominated for Munster Player of the Year and make no less than 9 Irish appearances.

He made his 100th appearance for Munster against the Ospreys in September 2017 and finished the season with 24 appearances to his name. On the international front, Ryan was a Grand Slam winner with Ireland and also helped the national side to the Summer Series victory over Australia.

He made his 100th PRO14 appearance away to Cheetahs in November 2018 and was called up to the Ireland squad for the November internationals and 2019 6 Nations. Ryan signed a three-year contract extension in early December 2018, committing to the province until at least June 2022.

He scored his first international try against USA in November and made two appearances in the 2019 6 Nations. Ryan was included in the Ireland Rugby World Cup squad that travelled to Japan in 2019 and featured in one game.