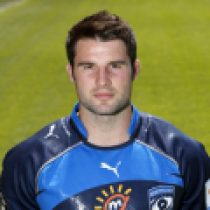 Born in Glasgow in 1985, Johnnie Beattie has been around the international scene since the age of 21. Beattie emulated his father, also John, when he made his first Scotland appearance in the 48-6 victory against Romania at Murrayfield in November 2006.

The pair, both back-row forwards, were the fourteenth father and son to play for Scotland, and Johnnie marked his debut by scoring the first of the seven tries in 48-6 victory. His second cap a week after the first was not so memorable for him as he was carried off with a leg injury only six minutes into the international against the Pacific Islanders.

He cemented his place in the international set-up during the 2009 end of year internationals and was an ever-present during the 2010 Six Nations - John claiming the man-of-the-match honour in Scotland's 15-all draw with England at Murrayfield and followed that by scoring his third try for Scotland, a magnificent score, in the away victory against Ireland.

He was again present for the historic Test series victory over Argentina later in the year but surgery on a shoulder injury in the summer of 2010 would sideline him for six months. His return to action was a drawn out affair and he made just one appearance during the 2011 Six Nations.

Beattie joined Glasgow on an apprentice contract in summer 2004 and made his first competitive start for the team in the Celtic League match against Ospreys at Swansea in October that year. In season 2005-2006 he became a mainstay of the Warriors team and earned a call-up as injury cover for the senior Scotland tour in South Africa before joining the Scotland under-21 team for the world championship in France.

In 2012 he signed with up and coming Top 14 side Montpellier. Beattie also represented Scotland at cricket as well as playing youth football for Rangers F.C.

A stint at Castres followed between 2014 and 2016 before he signed with Bayonne where he would finish his career in 2020 announcing his retirement with immediate effect in January.

He retired having earned 38 caps in total scoring 3 tries.