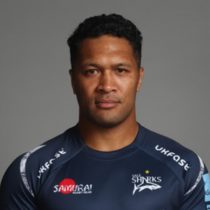 Born in Palmerston North, New Zealand, Leota is a powerful centre who has gone on to represent Samoa on the international stage.

Having played for Manawatu in New Zealand's domestic competition, Leota went on to play Super Rugby with the Highlanders before linking up with Sale Sharks in the English premiership in 2011.

He was one of 25 players selected in the squad for the Samoan national team's 2011 Pacific Nations Cup campaign, in the leadup to the 2011 Rugby World Cup.