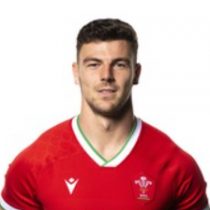 Born in Weston-super-Mare, Johnny was brought up in Tilehurst, near Reading, where he attended Park Lane Primary and Little Heath School.

Playing mini and junior rugby for Redingensians RFC before joining the Exiles’ academy set-up aged 14, Williams has matured into a formidable centre.

A gradute of the London Irish Senior Academy and previously on loan to Henley Hawks, Johnny first represented a Berkshire age-group team when 13, qualifies for Wales through his father Gareth and for Scotland through a grandparent. He can play full-back, fly-half or wing but centre is the route that he wants to take in the game.

Williams played a key role in Irish’s road to promotion from the Championship last term, playing 14 times for Irish during the 2016/17 season.

In November 2017, Williams continued his journey with the Exiles, with the explosive centre pledging his future to the Exiles by inking fresh terms with his boyhood club.

After 2 seasons at the Falcons, the strong-running centre signed a deal with the Scarlets in July 2020.