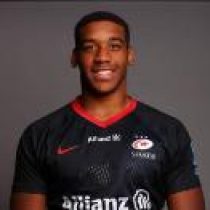 The lock made his senior debut for the Men in Black in 2018/19, coming off the bench in the Premiership Rugby Cup against Worcester Warriors.

He spent time on loan at Ampthill, helping them to promotion to the Championship, as well as featuring for Storm in the Premiership Rugby Shield.

Brother to Saracens teammate Joel, Kpoku earned international recognition with England Under-20s in the 2019 Six Nations and signed a new contract at Saracens in June 2019.