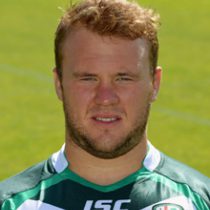 A promising young prop from Norfolk, Jonny Harris made his first-team debut for Tigers as a replacement for England international Dan Cole in the Premiership win over Leeds at Welford Road in November 2009. He picked up an Aviva Premiership 'A' League winner's medal with Tigers in 2010/11. He has also been capped by England at U19 level.

He signed for London Irish on a three year deal at the end of the 2013 season, where he played a part in their Premiership, European and LV Cup campaigns.

In 2016, Harris signed with RFU Championship side London Scottish for the 2016–17 season.

In April 2017, Harris extended his contract to stay with London Scottish for another season.

The prop was a hugely consistent performer throughout the 2016/17 campaign after joining from London Irish, and as one of the most experienced members of the squad he featured on 22 occasions for the Scots.

April 2018 saw the ex-Leicester Tiger prop Harris put pen to paper on a new deal to stay at the Richmond Athletic Ground for the 2018/19 season.