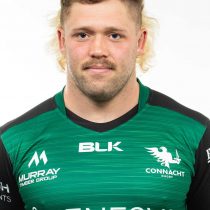 Born in Craigavon, Northern Ireland, Murphy has represented his country at U18/19/20 levels.

Jonny is a former Banbridge High School student who learned his rugby trade at the Ulster Academy, and playing top-flight club rugby with Ballynahinch.

He got his senior chance in 2015/16 off the bench against Scarlets in the PRO12.

In May 2017, Rotherham Titans announced the signing of the hooker from Ulster Rugby.

A robust and mobile forward, Murphy got his senior Ulster chance at 24 in 2015/16, as he came off the bench against Scarlets in the PRO12.

Murphy joined the Titans ahead of the 2017/18 Championship season.

He spent one season at the club before returning to Ireland ahead of the 2018/19 season after signing a deal with Connacht.

As of April 2020, Murphy has made 5 appearances for the Irish Province.