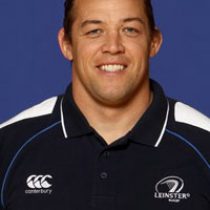 Gibbes's playing career began when he was selected as captain of the Waikato NPC team in 2003.

Since 2004, he made various appearances for the All Blacks, with his highest career achievement being captaining the Maori All Blacks to their first ever victory over the British Lions 19–13.

He then went on to join Leinster in 2008 as a forwards coach, helping the squad to win three Heineken Cup titles during a six-year spell in Dublin. The first of those successes came under the stewardship of Michael Cheika in 2009, before he assisted Joe Schmidt in the 2011 and 2012 triumphs.

He moved to France in 2014 and was part of a coaching set-up that guided Clermont to the Top 14 and Champions Cup finals in his debut season.

Gibbes has also gained valuable experience in coaching other aspects of the game, such as attack, during his stints at Leinster and Clermont.

In February 2017, Ulster Rugby confirmed to have signed Gibbes as the province's Head Coach ahead of the 2017/18 season on a two-year deal.

The former All-Black joined a new-look Ulster coaching staff in Belfast - alongside Dwayne Peel and Aaron Dundon, presided over by Director of Rugby Les Kiss.

Before the start of the 2018/19 season, Gibbes was released from his contract to return to New Zealand citing family reasons for his decision.

He signed a two-year deal with Mitre 10 Cup side Waikato before being approached by La Rochelle just weeks later.

He joined the French side in November 2018 following the conclusion of the Mitre 10 Cup season.

Having guided La Rochelle to the Champions Cup semi-finals for the first time in their history, Gibbes signed a deal to rejoin Clermont as their new head coach ahead of the 2021/22 season.

He signed a three-season deal with the side.