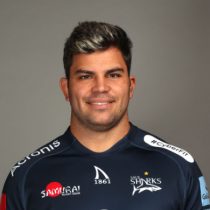 The South African-born, English-qualified back rower joined Stade Francais in 2014 from Super Rugby Bulls and also had a six-month stint at Saracens in 2013.

He made his Blue Bulls debut in South Africa in 2011 and he was appointed captain in only his third Currie Cup Match, becoming the first ever English speaking captain.

Jono helped Stade to the Top 14 title in 2015 and captained the side on numerous occasions during his time in Paris. He won the Challenge Cup in 2016 during his time with the club.

Ross' time in Paris saw him play alongside Italian stalwart Sergio Parisse but the club's financial problems and talk of a merger with Racing 92 soured his experience.

In April 2017, Sale Sharks announced the signing of Ross on a three-year deal. He is a versatile player equally at home at flanker and No. 8 and is also a leader on the field. His ball carrying ability will be a huge asset in the Premiership.