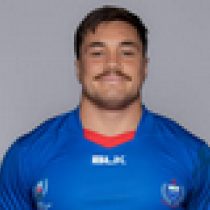 Front rower Jordan Lay made his way into the Bay of the Plenty side in 2016 after making the move from Auckland to Tauranga alongside his brother James.

A product of Auckland’s renowned King’s College, the prop progressed into the school’s first XV, before making the move south to Tauranga’s Bay of Plenty Steamers..

Lay was handed his Samoan international debut against Tonga in July of this year, before being selected in the South Sea Islander’s squad for their European tour.

In January 2018 it was confirmed that Lay would be joining Bristol ahead of the 2018/19 season where he again joined up with his brother, both being named in the Samoan Squad ahead of the Pacific Nations Cup.