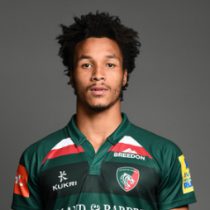 Tigers academy graduate Jordan Olowofela earned England honours at under-16 level and made his first senior appearance for Tigers as part of the squad in the Premiership Sevens in 2015.

Together with twin brother Ryan, he joined Tigers from Lincoln Minster School. Olowofela was named in Tigers 2017/18 Anglo-Welsh Cup squad.

In 2018 he was called into the England u20s squad where he helped England to the World Cup Final. Following an injury, to Manu Tuilagi he earned a call up into England's training squad ahead of the November internationals

Capable of playing at centre, full-back or on the wing, Olowofela scored six senior tries in his first 39 appearances for the club before signing a contract extension in July 2020.