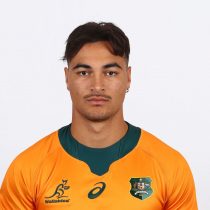 Petaia joined the Queensland Reds for pre-season training ahead of the 2018 Super Rugby season while still only 17 years old.

The coaches were so impressed with his input at training, the teenager was given his first opportunity in the Reds’ intra-squad trial match in early February.

At 190cm and 98kg, Petaia is an imposing figure in any backline, while his speed, physicality and skill at such a young age bode well for the future.

He made his debut at the age of 18 years and 24 days (the youngest ever Reds Super Rugby Player) and went on to make 11 appearances in his debut Super Rugby season. He is the 5th youngest player ever to play Super Rugby.

At the end of the 2018 season, he was named the Reds' Rookie of the season and earned a call up to the Wallaby squad for the Rugby Championship

In November 2018, Petaia signed a long-term contract with the Reds and Rugby AU that will see remain in Queensland until 2022.

Injury struck in his second season with the Reds, limiting him to just two appearances for the Queensland-based side.

He was recalled to the Wallabies ahead of the 2019 Bledisloe Cup and was named in the Wallaby World Cup squad as an uncapped player, the only one in Cheika's squad

He played three tests for the Wallabies and scored a try in his debut against Uruguay.