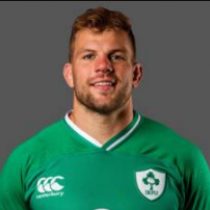 Born in Catalonia, Murphy is a talented back row forward with a huge work rate. Educated at the infamous rugby breeding ground of Blackrock College, Dublin, Murphy began his professional career in 2011 with Irish provincial side Leinster, where he has more than 85 appearances.

He represented Ireland at various underage levels, including playing a pivotal role in the laudable Ireland Under-20 outing at the Junior World Championship in 2011.

Murphy was named as Leinster's 2013 Young Player of the Year and his string of impressive performances with Leinster in the 2013/2014 season earned him a call up to the Ireland Senior Squad. He would go on to earn his first competitive cap for his country against England in the 2014 RBS 6 Nations Championship.

Murphy continued his good form for Leinster in 2014/15, becoming a fixture in the side in the backrow. Having a big impact off the bench in Ireland's successful 2015 Six Nations campaign, Murphy has subsequently been selected in Ireland's final 31-man playing squad for the 2015 World Cup.

Murphy has been ruled out for the remainder of the 2016/2017 season, following an ACL injury suffered during Ireland's win over New Zealand in Chicago, the back row scored Ireland's opening try despite coming off in the first half. Ireland went on to secure a historic victory, defeating the All Black's for the first time in 111 years.

In April 2017, Leinster Rugby announced that Murphy had signed a new contract with the club which would keep him at the Irish province until 2017/18 season.

In November 2017, he was included in the Ireland squad for the 2017 November Internationals, where he earned his 18th cap against Fiji.

As of December 2017, Murphy announced that he had agreed to join Ulster for the start of the 2018-19 season, on a two-year deal.