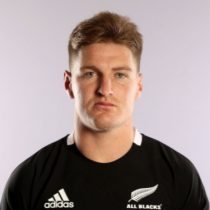 Jordie was the third and final of the Barrett boys to get into the All Blacks, with older brother Beauden in the All Blacks as well as Kane and Scott as Super Rugby players. A keen cricketer during his school days, the talented fast-bowler opted to pick rugby over cricket.

Barrett signed with Canterbury for their 2016 Mitre 10 Cup campaign.

He traveled with the Junior All Blacks squad as they prepared for the World Championships in England after a successful Mitre 10 Cup campaign with Canterbury.

He was the winner of the Duane Monkley Medal for the Mitre 10 Cup Player of the Year in 2016, and was also New Zealand's age-grade player of the year that year.

His start to the 2016/17 season for Canterbury was impressive, scoring no less than 33 points in the opening few rounds.

In September 2016, Jordie signed a two-year deal to play for Hurricanes and joined his brother Beauden in Wellington for the 2017 and 2018 Super Rugby seasons, and in October that same year was rewarded with an All Black squad call up for the November Internationals.

In May 2017, Barrett was not included in New Zealand U20s squad for the World Rugby Championship due to his Super Rugby commitments with the Hurricanes.

In June 2017, uncapped 20-year-old Jordie, who accompanied the All Blacks as an ‘apprentice’ on their northern tour last year, stepped up to join his older brothers Beauden and Scott with full All Blacks status for the NZ Lions Series.

After making his debut off the bench in the 78-0 win over Samoa, Jordie made his 1st test start vs the Lions after being named in the starting 15 for the deciding test where he scored his first test try.

After gaining an opportunity due to an injury to Nehe Milner-Skudder, Barrett showed he was physically and mentally ready, playing 17 matches and scoring 133 points in his debut season for the Canes before being selected in the All Blacks.