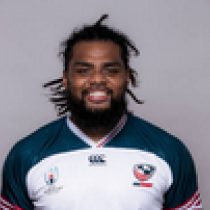 The former American Football player made the switch to Rugby Union in 2011 and enjoyed stints at Belmont Shore RFC in USA and Otorohanga RFC in New Zealand before earning a professional contract at USA PRO Rugby's San Diego Breakers.

Taufete'e made his international debut for USA against South Africa at the 2015 Rugby World Cup and has gone on to make nine appearances for the Eagles, scoring three tries.

Having initially joined the Club on a short-term deal in December, the giant hooker has made five appearances which included his maiden try against Harlequins at Sixways in January.

In May 2017, Taufete'e was named in the USA Men's Eagles squad for the Summer Series and Rugby World Cup 2019 Qualifiers this June and July, having won 7 caps.

Taufete'e fought his way into Warriors’ Premiership squad on a regular basis, having gone on to represent the side 23 times and scoring six tries before signing a new deal in February 2018.