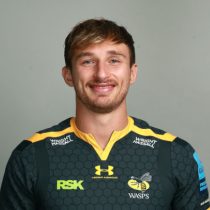 Josh Bassett began playing rugby at Ampthill RUFC and studied for a Sports and Exercise Science degree at the University of Bedfordshire, before signing with the Bedford Blues as a 19 year old.

He had a very impressive first season with them, as he topped the RFU Championship try-scoring charts during the 2011/12 season with 14, which lead to a rare and unusual call up to England U20s, despite playing outside the top flight.
He continued his good performances in his second season, scoring a multitude of tries, which lead to him lining up against the New Zealand Maoris for the Championship XV in November 2013
He described facing the New Zealand Maori Haka as one of his favorite experiences so far.

Basset was called up to the England U20s for the Junior World Championship in 2012.

He joined Wasps in the 2013/14 season and made 27 appearances in his first three seasons for the Black & Gold.

2016/17 was his first real bog season for Wasps, as he became a first-team regular. He was voted Premiership 7s Player of the Year at the start of the following campaign, in which he ended with the impressive Wasps career stats of 33 tries from 76 games.


Basset ran in another 14 tries in the 2017/18 season as Wasps made the semi-finals of the Premiership.

In the 2018/19 season, Basset become a Club Centurion for Wasps and was also their top try scorer that year, with 11 tries.

In February 2021, he signed a new deal with Wasps having racked up 136 appearances since joining the club in 2013.