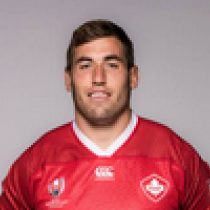 Larsen travelled to Hong Kong in 2014 with Canada’s junior side, starting in the second row.

His older brother Travis is a loose forward with Petrarca Padova in the Italian Eccellenza.

The Former Canada U20 representative was selected to play for Northland in the 2016 Mitre 10 Cup.

Larsen went onto make his test debut for his country in 2017 before making the switch to Otago ahead of the 2018 Mitre 10 Cup.

He made his test debut in the starting line up against Georgia in November 2017 and joined the Toronto Arrows ahead of the 2019 MLR season.

In August 2019, Larsen made the jump from Austin Elite to the New England Free Jacks.