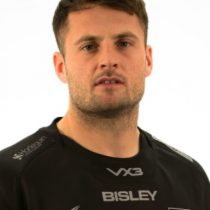 Flyhalf Josh Lewis debuted for Scarlets against London Welsh in August 2013, in a pre-season. A former Ebbw Vale RFC player, Lewis continued his development with Welsh Premiership side Llanelli RFC and amassed over 350 points in his 36 games.

Lewis rejoined Ebbw Vale and impressed with his performances proving pivotal as they won the Principality Premiership for the first time in 2015/16.

In March 2017, he signed for Premiership side Bath Rugby for the 2017/18 season. Lewis was recruited from Ebbw Vale to replace Adam Hastings, who left to join Glasgow Warriors and pursue his dream of playing for Scotland.

He made just three appearances for Bath before he left the Rec to join the Dragons. He made his debut for Dragons against Benetton Rugby in September 2018 and scored his first try that same month against Southern Kings.