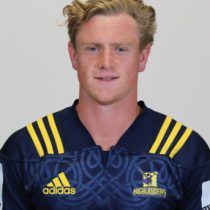 The local product went on to play for the New Zealand U20 side in 2014 and has represented Otago in the ITM Cup, counting the team's 2013 the Ranfurly Shield success as one of his career highlights.

A young scrumhalf who possesses a good pass and game sense beyond his years, Renton looks to have a bright future ahead of him and benefited immensely for his inclusion in the Highlanders' Wider Training Group for the 2015 season and made his Super Rugby debut in round 11 against the Brumbies in Canberra.

Renton made two appearances for the Highlanders during the 2017 Super Rugby season and came off the bench against the British & Irish Lions.

Renton made another two appearances for the Highlanders in 2018 and following the 2018 Mitre 10 Cup he signed a two-year deal with Italian side Zebre.

He made 9 appearances in total for the Highlanders (8 in Super Rugby and 1 vs. the Lions)