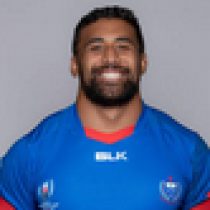 Hamilton Marist’s Premier A winning captain, Tyrell has he featured in the ITM Waikato team that uplifted the Ranfurly Shield from Hawkes Bay and was selected in the NZ Marist XV that played the NZRFU Heartland team in Masterton on 7th November 2015.

Tyrell switched Waikato for North Harbour at the end of the 2015 NPC season and helped his new side gain promotion to the Premiership of the Mitre 10 Cup.

In 2017, he played helped the side reach the Premiership semi-final where they were beaten by eventual champions Canterbury.

His Mitre 10 Cup form lead to a call up to the Manu Samoa squad for the their November Test, where he was named in the starting line up on his debut against Scotland.