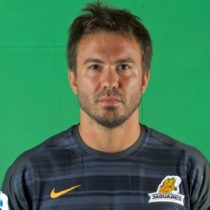 Nicknamed 'El Mago' which translates into the magician, Hernandez is one of Argentina's finest players. He can play anywhere across the back line but made a name for himself at Fly Half and Full Back.

Hernández was one of the key players in the most successful Argentina Rugby World Cup campaign, in France in 2007, when they finished third, having beaten the host nation in a shock opening result in the tournament. While a utility back capable of playing fly-half, centre or fullback it was the pivot position that he preferred.

He became a key figure in the game in helping Argentina bridge the gap from the previous European connection with their game to their involvement with Sanzaar in southern hemisphere Rugby Championship and Super Rugby competitions.

Hernández played six years for Top 14 outfit Stade Français featuring in 123 games. He had a nine-game stint with the Sharks in Durban before returning to France with stints at Racing Metro (75 games) and Toulon (8) before becoming a foundation player for the Jaguares.

While he made his international debut against Paraguay in 2003, in a 144-0 win, he cemented his place in domestic Test matches before making his mark on the international stage during the 2003 Rugby World Cup in Australia. He missed the 2011 tournament in New Zealand due to operations on his knee, and he also appeared in the 2015 tournament in England.

Hernández played 74 Tests for los Pumas with his final appearance against Italy in November. He hinted that once he had recovered from his knee injury he might play some games for the club he started out with Deportiva Francisa.