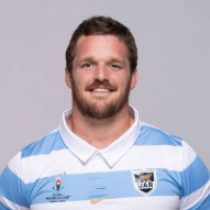 Making his U20 debut for Los Pumas in 2013 he was quickly drafted into the senior squad and made his debut in 2014. He was included in the 2015 RWC Squad

Montoya has earned 36 caps for Los Pumas since making his debut in 2014. However, he has started just four games for Argentina with Agustin Creevy considered the starting hooker and captain.

Montoya heads into the 2018 Rugby Championship with 10 test caps.