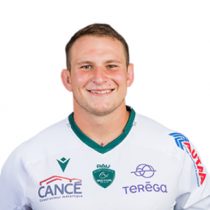 Delannoy was born in June 1995 and is a member of the Montpellier academy signing on a one-year deal.

He was a member of the France U20 squad that finished fourth in the Junior World Cup in Italy.

Delannoy made his way through the ranks at Montpellier and was a regular by the 2017/18 season and even featured in the Champions Cup semi-final against Leinster.

At the conclusion of the 2017/18 season he signed a three-year deal with Pau.