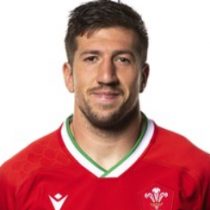 The impressive open side has been gaining rave reviews since his Ospreys debut against Aironi in 2010.

Tipuric, who is of Croatian heritage, made his Welsh debut in August 2011 against Argentina. Tipuric was a phenomenon at underage level and was highly tipped to be a Welsh great. He has represented Wales at every age-grade level.

He made 18 appearances for Wales Under 20 over two seasons, scoring eight tries, six at the 2009 Junior World Championship in Japan.

Often described as an out-and-out seven, Swansea based Tipuric fills the traditional role of the supporting openside when players make a break and this could prove a valuable asset in a side that will already boast a number of heavy forward ball carriers.

In 2013 his good form was rewarded when he was selected to travel to Australia with the 2013 British and Irish Lions. The back row was included in Wales' 31 man squad for the 2015 RWC.

In November 2016, after 128 appearances for Ospreys, he signed a new long-term deal, committing himself to his home region until the summer of 2020.

The Wales back-row showed outstanding form the following season, with his tackling stats defy belief. Tipuric made 31/31 tackles for Wales during the Autumn series. He is one of the most dynamic back rows in the game - he uses his speed to get to the breakdown quickly and lock over the ball before relieving his opponent of possession or forcing the penalty.

In 2017, he was selected for his 2nd British and Irish Lions tour. At the time of selection, Tipuric has made 51 Welsh caps and 6 Lions appearances (1 test).

The busy flanker was named in the Wales 6 Nations squad, finishing the tournament with 57 Test caps for his country.

In August 2018, he was named Ospreys captain, taking over the role from Alun Wyn Jones, who has held the post since August 2010.

He represented Wales at sevens in the Gold Coast 2018 Commonwealth Games before being named for the 2019 Six Nations squad with 31 previous appearances in the tournament.

He started in nine of Wales’ record run of 14 successive victories in 2018-19, including four in the 2019 Grand Slam success

Once again, Tipuric was named for the Wales squad ahead of the 2020 Six Nations with a total of 72 caps.

His inclusion in the British & Irish Lions 2021 squad comes after a sensational campaign where he once again underlined his all-round skillset. Tipuric suffered a tour ending injury playing for the Lions against Japan and was replaced in the squad by Josh Navidi