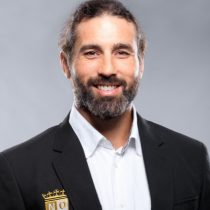 A well-travelled Samoan international second-rower, Kane Thompson has moved into coaching after a playing career that spanned over 19 years.

He had two stints with the Chiefs in Super Rugby and played a season with the Highlanders.

He spent time in France with Dax, England with Newcastle and in Japan with Canon Eagles.

He returned to New Zealand in 2016 to play for Manawatu before rejoining Taranaki for two seasons.

Thompson was the forwards and defensive coach for the Gold before being named as the side's new head coach in December 2021.

In November 2021, Thompson also served as an assistant coach for the Samoan international team.