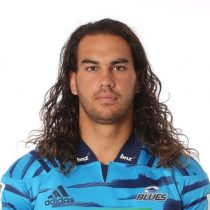 Pryor currently plays as a loose forward for the Blues in the Super Rugby competition.

Domestically, he plays for Northland in the ITM Cup having previously represented Auckland.

Pryor made his Super Rugby debut against the Highlanders in his hometown Auckland in 2016.

He had an impressive debut season making 13 appearances for the Blues scoring 2 tries, subsequently earning himself a place in the Blues 2017 Super Rugby squad.

Injuries meant that Pryor only made 4 appearances for the Blues during the 2017 Super Rugby season but the busy flanker made 2 appearances against the British and Irish Lions, once against for the Maori All Blacks and the other with the Blues.

Pryor had an outstanding Mitre 10 Cup season with Northland and was called up to the Maori All Blacks matches against the French Barbarians and Canada.

The busy flanker made 22 appearances for the Blues in Super Rugby since making his debut in 2015.