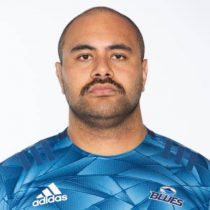 Tu'inukuafe learnt off some wily veterans in France and was meant to return for a second season, but a broken leg put paid to that.

Tuinukuafe weighed 170 kilograms before he was warned by doctors that his weight was life-threatening, ultimately he turned to rugby.

He lined out for North Harbour during the 2017 Mitre 10 Cup campaign and he was regarded as one of the strongest scrummagers in 2017 NPC.

A fifth-choice loose-head prop for the Hamilton-based franchise, Karl was named on the bench for the Chiefs for Round 3 of 2018 Super Rugby.

In May 2018, he joined the All Blacks squad as an injury replacement ahead of the June Test Series against France. He made his test debut off the bench against France in the first test and featured in all three tests.

Tuinukuafe featured in 16 of the Chiefs 17 Super Rugby matches and at the end of the season he signed a three deal with the Blues and New Zealand Rugby.

He made his first test start against Los Pumas during the 2018 Rugby Championship match in Nelson.

Tuinukuafe's incredible year was capped off with a nomination for the World Rugby Breakthrough Player of the Year. He made 13 appearances for the All Blacks in his debut season in test rugby having made his Super Rugby debut that same year.

Tu’inukuafe made his debut for the Blues from the bench against the Crusaders in the opening round of the 2019 Super Rugby season.

He went on to make a further 10 appearances for the Blues in his debut season with the club before a serious viral infection cut his campaign short.

It was expected that Karl would break back into the New Zealand side in the current year.