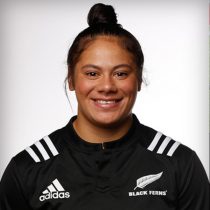 A product of Taumaranui High School, aKarli Faneva is a tall and athletic lock known for her well-rounded skillset and ability to find the try line.

Faneva made her Farah Palmer Cup debut for Waikato in the 2016 season, coming off the bench against Bay of Plenty.

Although appearances for Waikato in the 2017 season were limited to just three games, Faneva managed to find the try line twice, including during the Farah Palmer Cup Premiership semi-final loss to Canterbury.

Faneva enjoyed her breakthrough year in the 2018 Farah Palmer Cup season and established herself as one of the competition’s premier locks.

The Melville Rugby Club player started all seven of Waikato’s games, scoring three tries in the process. Faneva and Waikato’s 2018 season ended in a narrow defeat in the Premiership semi-final to Counties Manukau.

Faneva switched from Waikato to Bay of Plenty for the 2019 season and in that year was one of 29 players to be offered a Black Fern contract.