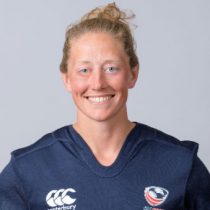 A life-long athlete, Zackary played soccer and basketball in high school before focusing on a decorated soccer career at Benedictine College. There, she earned Newcomer of the Year, Offensive Player of the Year and NSCAA Scholar All-American honors.

Zackary picked up rugby during her senior year in college where she didn't actually play in a game until receiving an invite to their alumni match. Two years later, she returned to her alma matter for a work opportunity and adopted rugby full-time.

An accomplished 7s and 15s player, Zackary made her debut with the senior Women's Eagles Sevens at the 2015 Atlanta Sevens, earning her first cap with the Women's National Team (15s) in 2016. Through her national team career, she has continued to appear on developmental Falcons tours, helping develop her own skills while guiding new waves of players.

As an Eagle, Zackary has helped the United States win Silver at the 2015 Pan-American Games, qualify for the 2016 Rio Olympic Games and achieved two fourth-place finishes at the Women's Rugby World Cup 2017 and Rugby World Cup Sevens 2018.

In November 2018, Zackary returned to 15s as Captain of the Women's Eagles.

She has her Bachelors Degree in Mass Communications with a minor in art and has coached girls high school rugby.

She heads into the Women's Super Rugby Series with 9 test caps and has featured in 13 World Seven Series events.