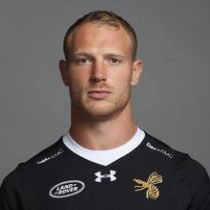 Myall appeared 127 times for Leeds and scored 12 tries before crossing the Pennines to join the Sharks. In his final campaign for Leeds, he made 28 appearances and played the full 80 minutes in all except seven of those games. Kearnan joined Sale Sharks in 2011, made 21 Premiership appearances for them in the 2012 season and was one of their stand-out performers.

After 74 appearances for Wasps since joining from Sale Sharks ahead of the 2013/14 season, Myall extended his stay with the Premiership club.