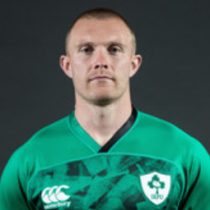 Keith Gerard Earls rose up the ranks at an early age due to his explosive pace, skill and vision and the wore the famous Munster jersey at the age of 19. It's hard to envision now but Earls started his rugby as an openside flanker but it was his move into the midfield while at St Munchin's College and St Nessan's Community College that saw progress into the test talent that he is today. Earls returned to St Munchin's and he won the Munster Schools Rugby Senior Cup with the college in 2006, alongside current Munster and Ireland teammate Conor Murray.

His impressive performances with his first XV at school saw him being selected to play for Ireland Schools and join the Munster Academy, during which time he played for Ireland Under-19s, Ireland Under-20s, with whom he won a Grand Slam during the 2007 Six Nations Under 20s Championship, Ireland 7s and Munster A, before earning a professional contract with Munster and moving to Garryowen.

Like his father, Earls went on to play Young Munster before he made his Munster debut against Ospreys in April 2007. During the 2007–08 season, Earls was part of the Munster squad that beat Toulouse in the 2008 Heineken Cup Final and it was not long before he earned his test debut against Canada in 2008 where he scored a try with his first touch of the ball.

His livewire performances with Munster and Ireland saw Earls being selected for the 2009 Lions Tour of South Africa. Earls cemented his place in both the Munster and Ireland squads in the years to come. After an impressive 2015 season following his comeback from injury, Earls was selected in the Irish squad for the 2015 Rugby World Cup. After much speculation that Earls would leave Munster for Saracens in 2016, the winger opted to sign a new 3 year deal with the IRFU and Munster.

After a 2-year absence from the national team, he scored a try against Wales in a world cup warm-up game then played in all five Ireland games at RWC2015, grabbing 2 tries against Romania at Wembley and another against Italy at the Olympic Stadium.

In June 2016, he started on the wing for Ireland in their first-ever win over the Springboks on South African soil. Earls played a pivotal role in the win over Australia, scoring the game-clinching score that capped off a successful Autumn series. He scored tries in 4 consecutive tests he became just the second Irishman to achieve the feat of scoring in 5 successive games, Joseph Quinn, 1913/14.

Earls featured in all of Ireland's 2018 Grand Slam Six Nations matches and completed the year on a high by starting in Ireland's historic win over New Zealand in Dublin. Earlier 2018, he signed a new three-year deal with Munster up to the end of June 2021.

He would go on to feature in 4 of Ireland's five games at the 2019 Rugby World Cup, his third appearance at the tournament, and by June 2020, he has 170 Munster caps, 56 tries for the Province and has represented his country 84 times scoring 30 tries.